Egypt November 2007-what I learned 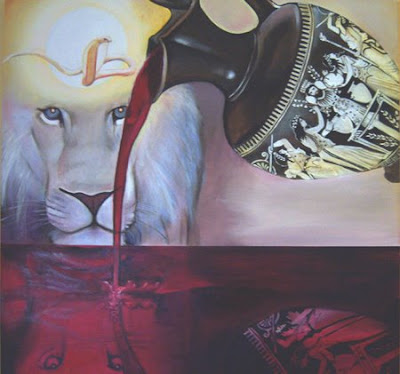 As Mercury goes direct today I woke up with a “download” of memories and the ability to finally put my Egypt experience into words. As I close in on the year anniversary of my first trip to Egypt I am finally able to synthesis and realize what I got from this trip.

The Tigris and Euphrates may be considered the cradle of civilization but I feel the Nile Valley is truly the source of all Western Cultures’ religions. This was never so apparent to me as it was in Egypt.

The first thing a person notices in Egypt is the sun. Even in November the sun is high and prominent, you can feel its heat and it is bright and golden. There is a sense of geometry and perfect direction in Egypt. The great river is a huge feature through out Egypt running predominantly south to north dividing the land into eastern and western parts. The great sun’s path runs east to west and crosses the great river at midday. Giving greater practical meaning to the symbolism inherent in the structure of the Great Pyramids at Giza. This element is punctuated by the Moslem call to prayers at dawn, noon and sunset. This practice gave me a sense of the unity of their community but also hinted at some other more ancient time when the stations of the sun god were venerated. Suddenly I was struck with the importance of the conjunction of the path of the sun in the sky with the intersecting river on earth. This relationship between sun and river was just like the action of warp and weft offering clues inherent the ancient shuttle of the goddess Neith and Egypt’s connection to the use of “as above and so below”. It was the sun and the river that brought life and abundance to Egypt.

One of the earliest known religious practices of Egypt involved the rising of the star Sirius. On my trip we visited the Temple of Isis at Philae the southern most temple in Egypt, here you can see a large viewing plaza were the rising of the star could have been viewed. It was at Philae where the highest points of the annual flood were measured by the elite priesthood to help pharaoh predict what the annual harvest would be. Because Egypt only gets about one half inch of rain each year it is dependant on the Nile for all of its water drinking as well as agricultural. Without water from the annual flood of the Nile Egypt would be a desert. The annual flooding occurred every year when the star Sirius merged with the sun. Coincidently this all happens during the month when the full moon is in Aquarius. The hieroglyph for the Nile and the symbol used in the sign of Aquarius is so similar. Even today we still talk about the “Dog days of Summer”. In ancient times it was thought that the sun grew hotter when the large star merged with the sun. Sirius or Sothis “dogs” the constellation of Orion. Orion is a prominent constellation known for his belt of three stars. (These three stars have been linked to the three pyramids at Giza. Again there is a sense of “as above so below” here.)

Orion also disappears during the summer months this is the time of the year when he is thought to be murdered by his brother similar to the Cain and Able story in Christianity and Judaism. After his death Osiris is then personified by the grain as it rises out of the mud left as the floodwater recedes, thought as being resurrected by the magic of Isis. The star Sirius was sometimes thought of as the tear of Isis and when her tear disappeared from the sky it flooded the Nile. Orion was associated with Osiris god of the grain, the sun at midnight and the judge of the dead. Osiris was died annually killed by his jealous brother the personification of the desert. These Osirian Mysteries were similar to the Dionysian Mysteries in which the gods were dismembered, symbolism of bread (Osiris) and wine (Dionysis) rites have their origins in these very similar rituals. I knew about the similarities between these two gods before my trip to Egypt. It was the connection to Sekhmet that I saw that was new to me.

While sitting at Philae author Normandi Ellis told the story of Sekhmet. This was the story about when Sekhmet was sent out by her father Ra to avenge his honor. Her killing spree was so intense that all the gods thought she would wipe mankind off the face of the earth so Thoth was sent out in the form of a baboon to try to stop her. His trick was to replace the blood she was devouring with wine (or in some versions of the story ochre colored beer) She drank the alcohol went to sleep and became dossal. I think what I was struck with was the whole blood changing into wine (beer) verses the modern wine turning to blood of modern Christianity. I always felt there was a female connection to the idea of the “body and blood” being connected to woman’s menstrual cycles some how. Here we also see that the domesticated Sekhmet turns into Hathor and becomes the wife of Horus savior god and son of Isis and Osiris. So to sum it up the revelries and drunken parties would serve to subdue the angry vengeful blood soaked Sekhmet into the lactating, gestating dossal Cow goddess Hathor. Symbolically and in the progression of general life cycle of the female I can see how this connection could be made by male observers. I still hold to the personal idea that women once ran these blood rites and rituals for themselves in secret without the judgment of men. The ancient Moon Lodge of western culture that has no written record but can only be mythologized and speculated about.

At Elephantine my roommate Gina and I opted not to visit the temple of the Ram headed Khnum. The idea of a male moon god insulted our sensibilities. The agenda for the group was to participate in a ritual where Khnum would remake us on his potter’s wheel. We found this out when people came back and decided Gina had given me a “makeover” on the train the night before and that seemed to cover it. (Gina being a makeup artist for Chanel by trade.) Fellow traveler Tammy got a lot from her experience at Elephantine felt a big connection with Moses in the rushes and the stories of Isis and Horus.

Upon returning to the US and connecting with the book “ The Jesus Papers” by Michael Baigent who spoke about the Hebrew settlement that had once been there. Baigent writes that Mary and Joseph may have settled there to raise the young Jesus. On Elephantine the synagogue and the Temple of Khnum are right next to each other. Stories and cultures commingle like kids at summer camp.

I could see this settlement has Old Testament connections to the making of Adam from clay or dust. This island of Elephantine seems to hold a key to the male creation mythos. And it just happens to be not too far down stream from the Isis temple. It is not too hard to see how male creation stories evolved. Rejected from the blood mysteries…and somewhere not too far away. Khnum like Khepera begins his creation story; Khnum is lonely and masturbates into the dust from there a great mound of land appears creates all the gods on his potters wheel and there you have it. It is interesting because the consequence of no rain in Egypt makes it a very dusty place, piles of fine dirt or dust piles up on street corners and cars like a Midwest snowfall. Making it abundant for all kinds of creative uses.

My biggest personal connection was with Luxor ancient Thebes. This is the part of Egypt where the river changes course and creates a bow in the river returning to its northward course at Dendera. At the beginning of the bow is Luxor on the east bank is Karnak and Luxor temples they are connected by an avenue of sphinxes.

During the inundation those avenues would fill with water and the barque or barge or sacred ark of Min would go down this avenue. The statue would go from one temple to the next and during Hatshepsut’s time revelries would be held all night at the her mortuary temple the statue of the god Min would be allowed to visit with the statue of Hathor the revelers would drink until dawn and when the sun would rise their torches would be dowsed in buckets of milk. Then the god would be returned to his own temple. I was also amazed to find that there is a storyboard panel that lights up at winter solstice sunrise and that the ramp at Hatshepsut’s temple aligns not only with this sunrise but also with the farthest southern wall of Karnak temple. If a tunnel existed thru the cliff wall behind this temple it would have shown light through to Hatshepsut’s tomb on the other side of the cliff in the Valley of the Kings.

“ Yea, though I walk through the valley of the shadow of death,
I will fear no evil: For thou art with me;
Thy rod and thy staff, they comfort me.
Thou preparest a table before me in the presence of mine enemies;
Thou annointest my head with oil; My cup runneth over.”

As the river curves around and creates a loop its farthest northern point on the west side of the river we find the temple at Dendera the temple consists of a Temple to Hathor and various birthing temples, it is where queens gave birth and seems to be the doorway to rebirth. As the River finishes its big curve and aligns with Luxor again we find Nag Hammadi the place where jars containing the Dead Sea Scrolls were unearthed in 1945.
Not far from Nag Hammadi is the Temple of Abydos built by Seti but now some geologist think it was much older at least the part called the Osiris Temple in the back which is much lower than Seti's structure. In abydos there is a grouping of hieroglyphs with clear carvings of a helicopter, jet and submarine? The carvings can be found on a lintel close to the ceiling some 20 feet off the floor. Seeing this left us all stunned and with tour guides began bickering over whether they are or not modern vehicles. They are, I know because I traveled to ancient Thebes in my dreams and if I can go there they could have certainly come here. They had to be doing something with those big obelisks that rang like giant tuning forks…

My interest and relationship to the culture of ancient Egypt seems to be an ever-unfolding onionskin. I thought I would find closure there I thought I would see it and be sad that it is gone and over. I have to say to my surprise Egypt is not dead not gone the doorway to the other world is still there and open. Beckoning us on to common ground.
Posted by Julie Cuccia- Watts at 10:48 AM 1 comment: