Orion/Osiris the Fool and Egypt 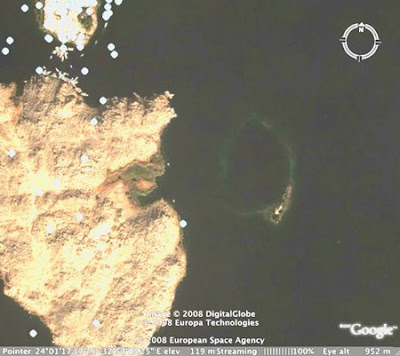 Good morning,
In the months since my return from Egypt I have been haunted by my trip.
There is not a day that goes by that I don't find my mind drifting back to Luxor, the Isis Temple and Hatshepsut's Morturary Temple.
I knew that in ancient times Philae(original spot for the Isis temple) was thought to be the source of the flood as it was the southern most border of Egypt and I think I must have known that water levels were recorded into the rocks there, though during our visit we did not see that. What I did NOT know was that the carving of the hieroglyph for of the Nile was there. The one that clued me into the connection between the Star card/ and the sign of Aquarius being connected to the Full moon in Aquarius which occurs in July during the flooding of the Nile. The carving is there on the western wall which we never got to see.
Anyway the other morning I am reminded that we were told that the original island just south of the temple island is where the thigh of Osiris was hidden.That morning finally I start to think about how this might be related to the old positioning of the temple. Seeing as the entire temple of Isis was moved stone by stone from the island of Philae in 1970 due to the flooding caused by the building of the Aswan dam. The original placement of the Temple would have been due east of the much higher rocky island(Biga Island) where Osiris's thigh was hidden. Which got me thinking about the constellation of Orion and its connection to Osiris and its disappearance just before the annual flood which begins around July 18. Now I needed to find a star finder to see if and when the last part of the Orion/Osiris constellation to disappear at the horizon at sunset would be his leg what date that would happen and if
so I am thinking there may have been a major ritual there to find the thigh of Osiris journey to the duat overnight watch the sunrise with Sirius in conjunction and Pharaoh or perhaps "the god's wife" would pour water from vessels as the flood waters would rise. The annual flood and the rising of the dog Star Sirius was so predictable that it was more accurate than counting the 365 days in the year. I am thinking now the alignment of the sunrise
on these dates would have shot down through the doorways in that side temple where we all danced and would have intersected right in front of the courtyard where the pharaoh would have stood to address the masses.

Intersections of east and west and north and south were sacred. As I was waking that day I realized why the Egyptian day began at noon. It was the time when the sun would come in conjunction with the Nile and the crossing would have been deemed as sacred the meeting of the ad blending of the opposites. Picture the perfect south to north flow of the Nile and the perfect east to west journey of the Sun/Ra. at noon these two paths cross as they would again when the sun reached midnight. This "sun at midnight" is referred to in what little is written about initiation of the priests of Egypt.
Again this is referred to in the journey to the duat as warp and weft. Nearly where ever you are in Egypt there is a distinct sense of direction, the Nile running south to north and the sun going east to west some with exceptions of course like the area of Abydos and Denderah.

In my quest to find the perfect starfinder I came across Google Earth I was able to see in great detail the area of Biga Island and even the submerged island of Philae perfectly due east of Biga. When I looked at Google Earths'
detail of Orion there was a big surprise waiting there for me, not only would it appear from the original Philae that Orion would go leg first into Biga island but the word for Rigel (Orions' left foot)in Arabic is FOOT.

I am thinking there is a painting in all of this stay tuned.
Julie
Posted by Julie Cuccia- Watts at 6:03 AM 1 comment: