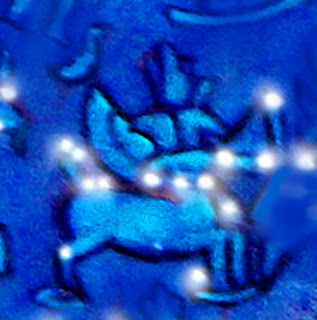 The waning crescent moon in Libra at winter solstice allowed us to linger on our own shadow for a moment before releasing the past and allowing our hearts to lighten moving forward and reaching into the void for something exciting fresh and new.
On Saturday December 24th the New Moon will be in real sky Sagittarius the sign of the two headed hero/ villain wearing both the head of Horus the savior god and Set his vilified uncle meaning the ridiculousness of politics will continue on with it's strange polarized cartoon characters of the past year or so. The new moon's merge with Pluto the planet that reminds us about what HAS to happen let's us know that all this theater is happening for a reason. We the people can not stand by idly anymore this is our moment to make real change in the way things are run. This activity is squaring Uranus and yes it is taking up our free time . But these Pluto square Uranus moments are always present when fascist regimes try to take power. The last time this happened Hitler tried to take over Europe and yes it is that big now.
You folks born between 1963 and 1971 with Uranus and Pluto conjunct this is your moment, you are the generation whose "will" is being tested you may have never taken a stand before you may have kept the peace and never been a "cause" person but if you don't act you will not like the taste of the future.
Jupiter in real sky Aries is trining this new moon/Pluto conjunction, the new beginning that has to happen... we are expressing and defining who we are in a big way and it is going to feel good to finally take a stand. This is what they talk about when they say fighting for your freedom.
All this defining of the self you've been ruminating over inside is about to come to the surface as Jupiter in Aries goes direct on December 25th. Perhaps for the first time ever families may see eye to eye on politics during this holiday season.

As Mercury moves from Ophuichus/Serpentarius the healer to Sagittarius the warrior sometime in the night between January 7th and January 8th our thoughts move from healing and transformation to how to fight for that healing and transformation. We are suddenly thinking about action plans this is boosted by the energy of the full moon in Gemini on the 9th. As we think about all the great people we are partnered with and find the strength for standing up for ourselves.

The full moon in Gemini opposes the Sagittarius sun and this means solidarity will face off with the crazy asshats in power.

As Venus moves into Aquarius on late Friday the 13th of January we get a lucky sneak peek at the beauty of the Aquarian Age. We will know what is beautiful .

As the sun moves into Capricorn later in January we will see we've won a battle in a larger war and the uphill climb will stretch out before us we will use what we learned and who we've aligned with in the past year to move upward in the work that is ahead.
As people expand their ideas about who they are. We can expect the joy to come from doing hard work that is self motivated. Expect inspiration from miraculous new ideas and innovation as creative minds meet creative minds in the months ahead.
Posted by Julie Cuccia- Watts at 7:33 AM 4 comments: