Ruminating on Lammas and the Fundamentalist Attacks on the Goddess Columbia 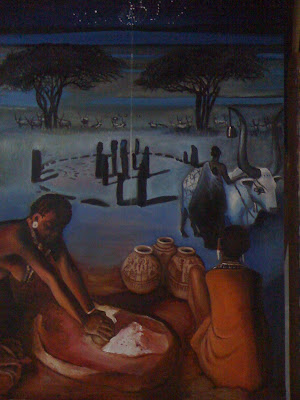 I woke this morning from a dream about being chased by a tall dark haired ex-husband who was a cop. I was being accused of murder. When he caught me he tried to pull me down between heavy slabs of ever diminishing stone. At the last minute I kicked him and ran. He would not follow me down the hills but would pursue me on up hill climbs. Running down hill was easier so I ran down hill as much as possible. I came to a group of people having a parade and tried to lose him by blending in with the crowd. I saw a group of women lining up against a wall for a meeting they were nuns and catholic lay women I sat quietly blending in with them. Suddenly the man showed up I slid under the table and whispered to the nun who had been sitting next to me..." he's my abusive ex husband don't let him find me." As she whispered to the other women in this line to protect me the farther down the line the message went the less likely it seemed these women would keep me safe. Just as my position was compromised I woke up.

Sitting with my husband Peter we analyzed the dream together picking apart it's symbolism. I felt strongly that the dream had to do with the fundamentalist Christians holding prayer vigils against the goddess Columbia. He asked me what my ex husband represented and I told him, mainstream America NASCAR and fundamentalist Lutherans who were forbidden to belong to lodges. This fit my suspicions about the dream being about the goddess Columbia.

The goddess Columbia was the goddess of the illuminati I didn't know this until just yesterday when I looked her up. I thought it was strange that these fundamentalists would be going after a goddess of the illuminati since the Bush family was rumored to have ties to this group... So in my mind they seemed to be infighting against their own elite. They were also exposing proof that the founding fathers were not creating a so called "Christian Nation" but were in fact creating a well thought out democracy based on the principles of the constructs of their fraternal secret societies of Europe as well as the governing rules of local indigenous peoples. Blending the ideals of these nations was a lovely combination in it's purest sense if you can disregard Europe's misogyny and slavery.

So I saw the assault on Columbia and the statue of Liberty not so much an attack on paganism but on fraternal orders and constitutional America because as a practicing pagan they had not attacked or even scratched the surface of my core beliefs, as I saw it secret societies and fraternal orders had always missed the core ideas of the divine feminine and as long as women were barred from these orders their symbols and so called secrets would remain hollow, lifeless, mysterious and without practicality or reality.

As we analyzed the dream more the idea that this ex-husband would not follow me if I ran down hill reminded me of the distain and fear these fundamentalists have for the underworld this their hell to be feared as the place of the condemned and damned...this is clearly the place where we as pagans can seek refuge and protection.

I saw the row of nuns as a symbol of my own Catholic roots after I left Catholicism I could see that the goddess of ancient times had been kept safe within this religion although like the dream as the message was passed down the line her safety became less assured.

It was my ex-husband's religion that taught me what parts of the oldest pagan religions had been saved thru Catholicism because the parts that the Protestants had stripped away were the parts that faintly held onto this light. And now it would seem the extreme right was waging another holy war against sacred geometry, natural order and any form of goddess.

This all seems timely as we pagans celebrate Lammas first harvest of three harvest festivals. First harvest marks the harvest of the grain. It is a cross quarter day which means this holiday marks the day between summer solstice (the longest day) and Autumnal Equinox(second harvest) Their are 8 of these solar holidays that celebrate the seasonal changes in the pagan calendar. At Lammas also known as Lughnasad the days begin to show signs of becoming shorter and the wheat fields are cut down. The first new grain is ground into the first fresh flour of the season bread is baked and shared with community. This holiday is also known as the "least", this would have been the time of having the least in a time when communities were dependent on their own crops to sustain them throughout the entire year. This rings true especially because grains were actually a last resort food for the our most ancient ancestors. Dietary experts who study diseases like celiac disease and allergies to glutton will tell you the human stomach was never made to eat grasses. Bread was the ancient world's processed food and was eaten in times of famine and strife. 8000 year old grinding stones found in the shrinking savannas of what is now the western deserts of Egypt will attest to this fact. This is what brought a fully developed black culture to the shores of the Nile thousands of years earlier than mainstream keepers of history would like us to believe mainly just to maintain a biblical reality that supports certain ethnicities over others. But science and genetics supports a black African beginning. Perhaps this also explains the desperate power grab of this GOP political movement against reelecting our first black president, the assault on worker's rights, education, science and an obscure little goddess holding a torch named Columbia.

All I can say to these people is Dudes black magic returns 3 fold...just sayin'
Posted by Julie Cuccia- Watts at 10:25 AM 2 comments: